On a  recent visit to the retreat, I was enchanted with the spectre of a double rainbow over the labyrinth.  It was at the end of a hot and humid day and just as the sun was getting ready to slip over the horizon, the clouds parted and there was a most amazing light dancing on the tree tops. A shower in the distance provided the catalyst for a most amazing rainbow.

Did I manage to capture the image? Sadly no…. one of the rare occasions when I had neither camera or smartphone with me.

Earlier in the day, I had shrugged off the lethargy and done a New Moon meditation and vision book page. The next step was to take the vision book into the labyrinth and meditate further on what had come to me.

As I came out of the labyrinth, I was reminded of the benefit of journalling the experiences, many abridged versions appear here in this blog. I remembered a comment from a reader some time ago who suggested that I include video. With that in mind, I walked slowly back to the centre recording the journey, which I would share, except that it seems that the iphone video is not compatible with this platform. The act of mindfulness in walking slowly and holding the camera steadily made for a different experience. The focus was not on myself, but how could I best film the pathway so that viewers would not feel dizzy or sick and that they could really get a “feel” for the rustic nature of this labyrinth.

It cannot be compared to the  pictures of the labyrinths in North America and Europe that are either beautifully paved or have lush green turf….  This is country Victoria coming into summer.. the weeds and the grass have turned to straw brown, the soil is drying and cracking and the patches of gravel are rust red and need to be stepped on carefully.  The mounded soil of the rings allows some long grass and other small hardy plants to grow, but there is no sign of life in the outer ring where the garlic was planted, except for 2 sage plants and a lavender plant that has just flowered. As each step is taken, there is a crunching sound… the dried up plants…. the opposite to the Northern Hemisphere which had record snowfalls on that same weekend.

So whilst the intent has been to share the New Moon experience with you, I can only do so with words and not pictures…. perhaps some enchanted things are not to share…… 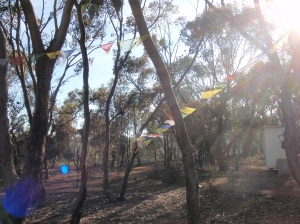 I keep getting glimpses or flashes of movement out of the corner of my eye… taking a photo in the general direction usually reveals a series of orbs… a large, round dark blue  one, an oval shaped aqua blue and a bright green orb. Sometimes they appear on their own and other times all together.

The first time I saw them on camera was on a trip to far north Queensland and we were coming home via Lawn Hill.  Camped in a shady spot called Adele’s Grove, I had a sense of this movement or presence. Later that trip we encountered heavy rain and flooding just out of Innaminka in Central Australia and I discovered the green orb in photos of the very muddy car.

I get a sense that they offer me protection.

From time to time as I have walked the labyrinth, I have felt a presence alongside me and since a friend who came to the “Back to Basics” weekend confirmed something similar, I decided to call in the Archangels as I walked the labyrinth on Sunday morning.

As I walked into the third ring, I got a sense of the light making shadow patterns with the grass gently blowing in the breeze. Each coil felt quite different as I walked, notwithstanding the change of direction and the uneven pathway.

At the centre, I paused for reflection and the light seemed to intensify and shimmer. When I looked up to focus myself for the walk out, I noticed the clouds……They looked like the remnants of a labyrinth drawn in the sky……

I centred myself and felt a powerful connection to the earth, through my legs and base chakra and then it was gone…. time to return to the outer world and continue with the day’s planned work.  All too soon, I was back at the entrance and aware that a shift had occurred. Re-reading the journal work afterwards, I discovered a passage of writing that has intrigued me since. Next journey within the labyrinth I will ask for it to become more clear…….

Just in time for the weekend – winding down after the emotional highs and lows of Easter, Passover, Holi and a full Autumn Moon and Equinox.

To find out more about the programs and therapies now available at Balance4Life, book in your no cost, 30 minute Discovery Session here.

Find us on Social Media